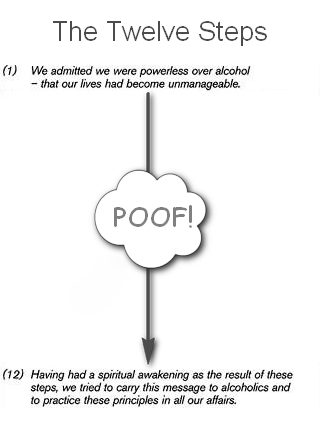 At a meeting the other day, a guy suggested a topic and proceeded to share at length. It really makes no difference what it was, but two things were clear: the person didn’t have any concept of what recovery is really about, and he is so far up in his head that he has a long way to go before getting the hang of it.

It got me to thinking about when I was in the same boat. To begin with, I analyzed everything. I was so smart and so on top of things that I’d been pretty much a useless drunk for the previous six months and a semi-functional one for several years before that. So, naturally, a few weeks out of treatment I thought I had all the answers.

I had all sorts of high-falutin’ theories. I’d read a few books, and I was pretty sure that with a bit of effort I could become a recovery guru and help all those other poor folks who just couldn’t seem to get it. I was going to re-write the Big Book and streamline the program so that it would work for folks in the here and now, instead of fooling around with ideas that were (at that time) fifty years old. The fact that those ideas were the only method that had been getting results up until then had managed to either escape me, or didn’t seem as important as my own ego.

Some years later, I found out that old-timers (miraculously I was one by then, sort of) call that “two-stepping”: going from the first step directly to the twelfth, without bothering to work on the stuff in between. I had been through the steps, although not all that thoroughly, and over time I had picked up a few things, largely by accident. I hadn’t become the paragon of recovery that I imagined myself to be, but I had learned enough to fool me and most everyone else, and even to help some folks.  I just wasn’t doing all that well personally, although I imagined I was.

I’ve learned a bit more in recent months, while working on some major character defects that I’d managed to overlook for most of my life.  One of the things I picked up is the realization that the rest of those steps are there because they need to be. Recovery is about a lot more than getting clean. In fact, getting clean is just the price of admission. Mainly, sobriety is about getting rid of the old habits that went along with our addictions and substituting new ones that allow us to think and act like people who are no longer under the influence of mood-altering substances and/or behavior. It  takes time and plenty of effort, and is emphatically not about teaching others.

Step twelve — carrying the message — is about example. It’s about doing the next right thing and being consistent. That can involve service work, sponsorship, simply showing up at meetings and being there for others, but most of all it involves living a good life in such a way that others who see and hear us “want what we have.” If others don’t find our example attractive, then why on Earth would they want to get clean and sober?

When we try to fake sobriety we may fool people who are sicker than we are, and we may be able to fool others. The big problem, though, is that we are invariably successful in fooling ourselves. That will always come back to bite us in the…ah…end.