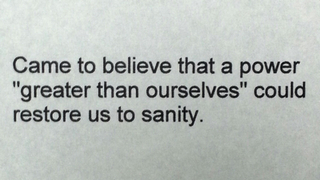 I heard another newcomer at a meeting complaining about how she’d had God shoved down her throat by her parents, and she wasn’t having any part of this Higher Power stuff, blah, blah, blah.  I find this sort of thing tedious, to put it lightly, having listened to and read about it frequently over the years.  Even when I was claiming to be an atheist I thought it was shallow and ill-considered.  So, since it’s my blog, I thought I’d write about my take on the issue.

It seems to me that if there is a Higher Power, in the sense of someone or something unknowable that affects the physical world, then it must be right here, right now.  I have to admit that I have yet to develop that faith.  Frankly, I find the concept of some metaphysical being busy watching over the entire universe a bit difficult to fathom, while still entertaining the idea that I can appeal to that entity for help with my little problems.

On the other hand, I find the idea of a god within me, you, and perhaps every other living thing or even the Earth itself not only (remotely) possible in a physical sense  — or at least not impossible — but rather pleasant.  The idea of something that permeates my world and provides a gentle push occasionally to keep things running smoothly for those who wish to have things run smoothly is comforting and engenders hope.  I hope that I may come to believe in that sense, someday.

That said, I most emphatically do believe in a higher power in recovery.  The fellowships, their members and my other supports are my higher power at present, and for now they seem to be enough.  Their collective wisdom provides guidance, and their attempts  and successes in sobriety and recovery give me hope.  They’re there when I call on them — not always individually, but invariably in the collective — to provide the sympathetic ear and moral support that I need to further my own recovery.  And I am here for them, which makes me part of someone else’s higher power, I suppose.

That being the case, I want to register my strong opinion that using the “God Issue” as an excuse for turning away from the 12-step fellowships is simply an excuse for not pursuing recovery.  In my quarter-century-plus of hanging around AA, NA and some of the other A’s, I have never been told by anyone whose opinion I thought worthwhile that I was required to believe in someone’s God-with-a-capital-G in order to stay sober or work a program of recovery.  That is borne out in the basic texts of every fellowship that I have encountered, if a person cares to read beyond the “G-word.”

We don’t have to believe in God to work a good program of recovery.  Period.  But we DO have to believe in some power beyond ourselves, because the humility to accept new ideas is absolutely essential in order to drag ourselves out of the morass of our own twisted thinking and into a place where we can begin to change and grow.  As a sponsor of mine used to say, “There may or may not be a God, but if there is, you ain’t it!”

So spare me the stories of the Gawd of your childhood and the atrocities committed in His name, then or now.  Spare me the sophomoric, angst-filled testimony of how you can’t “get into” AA or whatever because you have to believe in god.  One more time: You can work a perfectly good program without believing in God, regardless of what the Bible-thumpers in the rooms might say.  As is announced at meetings, the opinions there are those of the individual members, not the fellowship as a whole.

The only higher power you MUST have is the people who will help you drag your sorry butt out of the hole of addiction and into sobriety.  If you get careless and start believing in something else — well, I envy you.

11 thoughts on “Concerning A Higher Power”