Today is Yom Kippur, the Jewish Day of Atonement, and it seems to me a good day to talk about making amends. 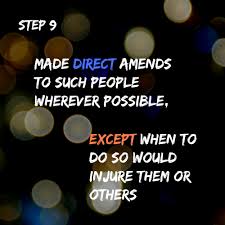 The idea of making amends confused me in the early days of my sobriety. I knew I was supposed to do it, but I really had no idea of what to do or how to go about it. I equated it with saying “I’m sorry.” I was well-practiced at that, as most addicts are, but somehow it didn’t seem like enough. That was how I went about it, though, and pretty quickly. I suppose I had a sponsor, but I wasn’t big on taking advantage of sponsorship (or taking direction), and I saw recovery as more or less an event, rather than a process. Thus I was gung ho, ready to go — and far from being in the know.

That went about as you would expect. Some people, like my mother, didn’t know how to express their anger to begin with, saw forgiveness as a duty (staunch Catholic), and so welcomed me back to the fold with open arms and a load of hidden resentment, I’m sure. Others took a wait-and-see attitude, and some refused to consider the idea — vehemently. And of course I was going about it all wrong, because I didn’t yet have the skills to make the amends believable.

I was still going about it in the old junkie way: “Oh, I’m so sorry! I’m clean and sober now, and I’ll never do it again!” Of course they’d heard that tale before, and weren’t likely to greet it with much more enthusiasm this time, whether or not they put a polite face on it.

That’s not the way we make amends.

First, we demonstrate by the way we’re living our lives that we have changed. Then we make sure that we have something useful to say, because making amends isn’t just saying “I’m sorry.” Making amends is saying, “I hurt you, I’m sorry, I’ll never do it again to you or anyone else, and I’m going to do ______ to make it up to you. And then we carry out our promises, thus proving our point: that we’re sincere, and we can now be trusted to do the right thing.

We need also to be aware that forgiveness does not imply trust. Just because my Aunt Bessie forgives me for pawning her silverware and “losing” the ticket, doesn’t mean that she’s obliged to leave me in the pantry unattended; she’s not even obligated to invite me to dinner. Those are her choices and her issues to deal with.

Which brings me to the purpose of the whole exercise. Making amends is about me; it’s not about the other person. What they think of me is none of my business, but what I think about myself is everything to my recovery. I need to know that I’ve done the next right thing, that I’ve been sincere, that I’ve done it properly. That’s why we don’t do it right away.

When we’re first abstinent, we haven’t had practice in being really sincere; we’ve stifled our consciences and convinced ourselves that we were the ones wronged — that our behavior was in some way justified. We aren’t equipped to handle the emotions involved with making amends: dealing with angry people, people who cry, folks who simply blow the whole thing off.

Most importantly, we don’t really know if we can carry out our promises — it’s early days. If we relapse we may make it back, but we’ll have disappointed and reinforced the doubts of those with whom we were trying to make things right, thus making things worse.

The Steps come in order for a reason. They each prepare us for the one that follows, and there are eight of them before the amends process. To begin with, we make amends by doing our best. When we have proven ourselves — to ourselves — then we’re ready to prove it to others.