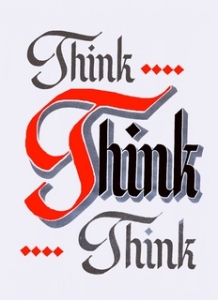 When we first get into a program of recovery, whether it is for substances or behavioral problems, we are still pretty-much controlled by our cravings. Think of addictive cravings as sort of like hunger: we may not be conscious of them every second of every minute, but if we have access to food we are going to eat — unless we have a very good reason not to.

Impulsive thoughts are closely related to compulsion. They just spring into our heads, seeming fully formed, because we’ve been used to acting on impulse. And because impulsive acting out has been our habit for so long, we may find that if our addictive thinking isn’t straightened out quickly, we’re in trouble. A friend of mine describes it like being in a bubble — it’s familiar, and easy to slide into. Once we’re in there, we’re effectively isolated from clear thinking and common sense.

“Think, Think, Think” is one of the most common slogans on display in meeting halls (sometimes turned upside-down to remind us of our jumbled thought processes). It’s to remind us to think things through before giving in to our impulses.

As addicts, we have to realize that we’re victims of “auto-thinking”.  Our thoughts normally run first to the familiar ways of dealing with issues. Happy: act out. Sad: act out. Dog ran away: act out. Dog came back: act out. Pissed off: act out. Acting out may not mean getting high or going on a shopping spree. It may show up as anger — nearly always based on fear — or withdrawal (ditto), or in many other ways.

Then too, just because we have an idea doesn’t mean it’s a good idea! We need to check them out carefully, in our own heads, and with others. If we’re angry, we need to back away long enough to think about the matter, then try to approach it in a constructive way instead of impulsively blowing up. Going out with the gang to a bar probably needs some thought.  Going on that date because we so miss interacting with people who might fill that empty place.  Buying that expensive (whatever), likewise.

We also need to learn not to settle for the first good idea. There may be a better way to handle things. Our addict inside tells us that stuff needs to be resolved now — or it tells us we don’t have to deal with it at all. Neither is usually the case. We have time to reflect, but we have to deal with problems eventually, before they get bigger.  Usually, though, we have time to back off and think about it: go to a meeting and share, call a sponsor or other recovering person, journal about it, or just reflect on the facts instead of what we think about it.

We don’t want to get locked into a rash decision, and until we learn the skills of contemplation, it comes naturally.  First of all, Think, Think, Think!

1 thought on “Thinking It Through”