The study of physics has taught us four basic things about energy. 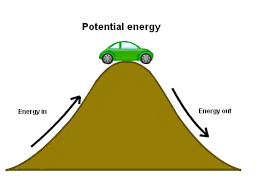 These concepts can be applied to all sorts of metaphysical ideas by people who have heard of these properties but not gone any further in their studies of physics.  However, we’re not talking about psychic energy and such; this is about energy as we use it daily, knowingly and with understanding.

When we apply energy we create work.  In physics, work has a very specific definition:

a force (energy) is said to do work if, when acting, there is a displacement of the point of application in the direction of the force.

In other words, if I give a ball a push it will move in the direction I pushed it.  Energy has been converted into work, and there is no way to move that ball without applying some sort of energy.

That’s also true of automobiles, which produce work using energy stored in gasoline, or batteries.  Horse-drawn carts moved via energy applied by horses, who got it from eating hay that had stored energy that it got from the sun.

The whole point is this: without the application of energy in the proper way and in the proper direction, no work gets done the way we’d like.  I can move my Hyundai by detonating a few sticks of dynamite beneath it, but that’s not useful work and most likely it wouldn’t get done the way I’d prefer.  (I’ve had a couple of cars where it would have been appropriate, but not this one.)

This stuff’s all pretty obvious, but for some reason there seems to be a common idea amongst folks who claim to be in recovery that they can achieve the work of changing themselves without applying any energy and doing the work.  There also are those who seem to fling energy around in all directions, trying to do things their way instead of applying it in tried and true fashion.

The writer Robert A. Heinlein espoused a philosophy that he expressed as TANSTAAFL — There Ain’t No Such Thing As A Free Lunch.  Someone, somewhere, is paying, and it may be us even though we don’t realize it.  In the case of recovery, it’s always us, but depending on our success or failure it may also include our loved ones, friends, other associates and — ultimately — society as a whole.

Energy.  Don’t just fling it around.  Find the direction that has worked for the most people, and pull your cart down the ruts they created.  You can strike off cross-country when you have energy to spare.