According to a famous Buddhist teaching, one of the monks was troubled because the Buddha didn’t address existential questions such as “Is there a God, what happens when we die, and is the universe infinite.” (Some Buddhist sects do approach such questions, but that was added later.) 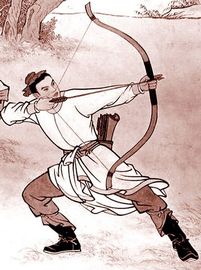 Anyway, the monk was kvetching, so the Buddha asked him, “Suppose you were shot with a poisoned arrow. Would you refuse to have it removed until the poison was analyzed and you were given the results? Would you want to know what kind of wood it was made of, what sort of feathers were used for fletching the arrow, the maker and strength of the bow and the name and clan of the archer?”

His student answered, “No! Of course not!”

The Buddha said to him, “I teach about the here and now.”

Whether or not that rings any bells for you, I can’t help but think about our program of recovery and the way I first approached it. I drank, drugged and did other stuff. I wanted to quit. Some folks showed me how and supported me until I could move forward on my own. They told me how they stayed sober.

But I, like the monk, wanted to know everything there was to know instead of just doing the work. I started doing the work, but I got so wrapped up in my head that for some years I missed seeing the forest because I wanted to know the name, genus and species of every tree, along with the underbrush that surrounded it. Learning all that stuff made me sound good, but it didn’t help my sobriety much (although it’s possible it may have helped some other folks a little).

When it came down to the path through the forest, all that book learning was pretty much useless. In the end, it was all about a simple map: the Steps, One Day At A Time, help another addict, make phone calls, get back to meetings, do service–all the stuff I’d been hearing from day one. That poisoned arrow (ego) did a number on me, and for a long time I didn’t even notice. Others did, but I had the poison in my system and wasn’t able to see it myself. Eventually the arrow was yanked out–painfully–and I began to get somewhere. Sometimes I’m still not sure where, but at least I’m headed the right way down the path.

Think about that. Poison bothering you? Want the arrow removed so you can start to live again? You already know the name of the archer.

2 thoughts on “The Poisoned Arrow”