Boundaries: They’re what you make them.

In some of our fellowships we speak of boundaries, and well we might. Good boundaries are major bricks in the foundation of emotional health and recovery. It seems, however, that many people have the idea that boundaries are like a fence we build around us that others aren’t permitted to cross.  That’s not the case; boundaries guide our behavior, not that of others.

Boundaries are essentially knowing when to say yes or no. Perhaps we were not allowed ever to say “no” to a parent. That crippled us. We felt as though expressing ourselves was against the rules, that it would place us in danger of punishment or, less obviously, by damaging a relationship that was necessary to our survival. We felt invaded and ruled. As a result we may never have learned  that it is okay to make our own healthy choices.

I remember well a moment in my childhood when I said, as kids do, that I “hated” my brother. I was probably seven years old, with no concept of what hate really meant. What I was probably trying to express was that I resented the attention he got from the adults — attention and nurturing that had formerly been exclusively mine. Instead of setting me down and explaining what hate was and asking why I felt the way I did, my mom slapped me, as if my words had some magical power that would harm my infant sibling.

I hold no grudge against my mother for that 60-odd-year-old bit of unskillful parenting. Nonetheless, it taught me a powerful and undesirable lesson about my permission to express feelings, and that lesson followed me for a long time. Mom did the best she could with what she had, but in that instance it didn’t quite measure up to good parenting.

Some of us were controlled or smothered to the point that we never went through the adolescent rebellion that is a normal part of preparing to face the world as adults, separate from our parents. That failure to detach from parental control according to instincts hard-wired into the race by many generations of development (evolution, if you will) can be a real problem later on. “Honor thy father and thy mother” is fine. Letting them dictate life choices is always a bad idea.

Perhaps we were abused and continued to cling to the abusive party as adults, hoping to be the “good” child, hoping subconsciously to finally get right whatever (unknown) failing of ours we believed had caused the abuse to begin with.  Obviously that’s a dead-end because the failing was on the part of the abuser, rather than ourselves. Or perhaps something happened that caused us to become unable to say “yes” to a parent or other caretaker, resulting in our inability to accept ideas, affection and recognize feelings in ourselves and others, to never able to accept other people’s views, or compromise when appropriate.

Boundary issues usually boil down to our lack of an understanding, deep down, that we have the right to decide yes or no in a situation. They are about our right to assert ourselves, not about the behavior of others. To think, “Well, she tried to cross my boundary but I let her know that was inappropriate,” while it may have been the correct action, is not the best way to look at it. It may not have been inappropriate from her point of view, but if it was from ours we still have the right to say no. “I set a boundary and kept it” is a more accurate way to think, as it puts the responsibility where it belongs: on us.

Boundary issues are often not as clear-cut as the examples above. The idea that we have no right to say yes or no can slide into our lives and mess them up without even being noticed until later. We may convince ourselves that it is our “job” to care for someone who is capable of taking care of themselves. (When we do that for addicts we call it enabling.) Another example would be someone who devotes a life to taking care of an elderly parent despite the fact that there are siblings who could help. Often the siblings support this idea enthusiastically: “Well, we’ve got kids and a business to run, while Emma is retired and has the time.” Emma needs to learn to say no, at least part of the time.

At other times someone may choose to avoid making personal choices in order to avoid confronting life. Perhaps Emma believes that she has nothing to offer in a personal relationship of her own, and avoids imagined rejection by devoting herself to care-taking another.

Lack of boundaries and the ability to make healthy yes-or-no choices can lead to all sorts of poor life choices. Those can, in turn, lead to things like unwanted pregnancies, bad marriages, divorce, lost jobs, doctors, courts, jails, and so forth. Saying, “No, thank you, I don’t think so” could have changed many a life. 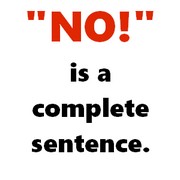 We are responsible for setting and enforcing our own boundaries and letting others know in a definite way what our wishes are. It is not their responsibility to figure out our limits any more than we ought to let them dictate our behavior, but it is their obligation to respect boundaries that we have clearly stated. It’s unlikely that they are mind readers, however. Complaining after the fact isn’t the answer; clear communication is.

Between equals in a healthy relationship, boundaries tend to take care of themselves. Even so, those we choose to set are our responsibility, not that of our partner. If we have preferences regarding aspects of the partnership we need to state them clearly, in a loving way. If we don’t, our failure to do so will likely lead to unintentional violations and can cause resentments that last for the life of the relationship. “He should have known…” is not an excuse. He or she will never know if we don’t tell them. Expectations have no place when it comes to boundaries except for the assumption that they will be respected. If that doesn’t happen, we need to re-evaluate the whole relationship.

1 thought on “Boundaries: They’re what you make them.”