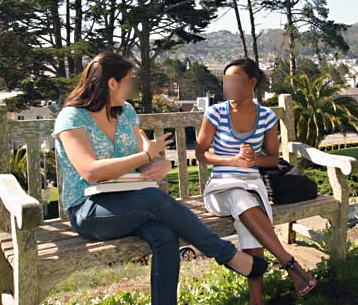 I’ve come to believe that going to meetings, getting a sponsor and working through the 12 steps is the most important part of recovery.  Why?  Because the process provides a template for dealing with recovery and its problems.

When I got to recovery, I was a victim of my own best thinking.  Someone pointed out to me that just because you can take a watch apart, it doesn’t mean you can put it back together;  you have to learn the skills.  That made sense to me. I had been unable to think myself out of multiple addictions, and it was clear to me that I wasn’t going to be able to think my way into recovery.  I needed to listen to people who had done what I needed to do, and learn from their experiences (and my own failures).  Getting a sponsor is really a prerequisite for going through the steps effectively, so I thought I’d kick out a few ideas about sponsorship.

Smart people don’t buy the flashiest car on the lot.  They do their research and get one that they can afford, one that that performs best for their purposes, gives the most value for the money, gets the best gas mileage, has the best safety and repair record, and so forth, and they always, always take a test drive.

To choose a sponsor, we don’t ask the first person we see. We watch for the people who clearly have good long-term sobriety.  We get numbers and call them.  We go out for coffee and “audition” them.  We choose someone who has what we want (and I don’t mean a Porsche) and who can laugh at himself or herself.

As far as qualifications go, we don’t choose sponsors based on whether they’re “right for us,” but by the quality of their program, what they share in meetings (and what they don’t share), and based on whether or not they’re likely to be able to pass their sober skills on to us. We choose someone who talks about solutions, not problems.

A sponsor’s purpose is not to be our friend or buddy (although that happens), but to guide us through the steps and help us find solutions to the problems of recovery.  A good sponsor will help us see when we’re fooling ourselves, because in recovery, fooling ourselves is usually fatal.

If it’s working properly, the relationship between sponsor and sponsee involves a lot of emotional intimacy.  This can make both parties vulnerable.  It is also unfortunately true that there are unscrupulous people of both sexes who prey on newcomers by first sponsoring them and then messing with their heads, and often their bodies.

Our sponsor needs to be of the same sex to avoid romantic entanglements.  Romantic situations in early recovery effectively stop the recovery, first because they distract us from our program, and second because we don’t have the emotional tools to handle them.  Heck, we don’t even know how to have decent relationships with ourselves!  Even if there is a broad age difference and no one’s interested in anybody, there’s no guarantee that they will always feel that way.  So men usually sponsor men, and women sponsor women.  However, it is not uncommon for gays to have cross-gender sponsorship, for obvious reasons.  And finally, romance aside, we hear differently and share differently with the other gender.

Many treatment facilities require their clients to obtain “temporary” sponsors, and this custom has spread out into the 12-step rooms as a whole. This makes sense for people in treatment, who not only have their counselors to satisfy but who may be leaving the immediate area when they finish primary treatment.

This is strictly my opinion, but I don’t believe temporary sponsors are a good idea, except in cases similar to the above. It’s an easy way to put off doing real work, because a temporary sponsor – more or less by definition – isn’t likely to be around for the completion of the step work, and may take a casual attitude toward sponsorship as a result – as will the sponsee, often as not.

I believe that the best relationships are forged when a person waits, chooses the right person, and commits to stay with them. It takes time to develop the trust and understanding that are both necessary to “do” sponsorship right. Temporary sponsorship puts the sponsor and sponsee in a sort of limbo. Best to tighten up and do it for real. We can always change down the line if things don’t work out.

First we have to ask ourselves if we want a change because the partnership isn’t working, or because our current sponsor is making us uncomfortable by pushing us into areas where we’re afraid to go.  If the latter is the case, the proper course would be to talk to the sponsor and see if an agreement can be reached to solve the problem, because challenging us to stretch ourselves is what a good sponsor does.

If, however, there is a genuine problem, whether of personalities, ability to schedule meetings, or perhaps the wrong kind of relationship developing, it’s simple: we look them in the eye and say that things aren’t working out and we’ll be looking elsewhere.  We don’t have to give a reason, and we don’t have to argue, but it is important to be open and honest so that we can hold our head up instead of dreading that we’ll run into him or her at a meeting.

Most people who understand the dynamics of recovery consider it unwise for us to choose sponsors with whom we have had a previous relationship.  Relatives (even distant ones), co-workers, and friends are generally thought to be off limits.

Sponsorship, when it works properly, involves sharing many things that we would quite possibly not want a family member to know, from things about the rest of the family to our own circumstances.  The same could well turn out to be true of co-workers and friends.  While we might be more comfortable with people we know in the beginning, it is likely that down the line our previous association will become an obstacle, especially when we are being guided through the steps – a sponsor’s primary function.

Generally speaking, a sponsor who is completely uninvolved with our outside history is best. Relatives, even distant ones, have ties to our families.  Friends may, as well.  Co-workers and their opinions are important to us.  These shared histories would most likely affect our ability to be open and honest.

In addition to all of the above, by choosing someone we already know, we are depriving ourselves of the experience of reaching beyond our safe space for help — a skill that most addicts and alcoholics need to learn.

Question: My sponsor makes has me spend two weeks or more on every step. I don’t feel that I need that much time to complete a step.  Is this typical, and why?

It is not unusual for sponsors to move us through the steps even more slowly than that.  When I thought my sponsor was moving too slowly, it usually meant that I didn’t want to look at issues as closely as I needed to, and history has confirmed that theory.

The purpose of the steps is to help reshape our ways of thinking about life, and that doesn’t happen overnight.  They are not simply items to be ticked off a list, but are meant to be put to use.  In early recovery, most of us didn’t have a grasp of our denial, the ways our behavior had hurt others, or how to go about dealing with those things.  Taking our time over the steps allows us to absorb the ideas behind them, and to begin putting them into action in our daily lives.

Another reason for not hurrying is that, as time passes, we will inevitably remember other things — other issues to which the step’s principles can be applied.  If we rush through without giving those things time to happen, we greatly lessen the impact of the work we are doing, both immediately and as we move on in our recovering life. On a personal note, as perusal of this site will reveal, I found issues nearly a quarter of a century later that I needed to address by going to treatment. If I had gone through the steps carefully, I might not only have avoided that, but a lot of unhappiness and misery that went along with it.

A few final thoughts about asking someone to be a sponsor:  The best potential sponsors often don’t volunteer. They may not raise their hands in meetings when they ask for people available to be sponsors, and may even remain off a group’s sponsor list. Some sponsors believe that a “candidate” shows his or her willingness by asking. They may also be busy people – as most folks in healthy recovery tend to be – and not want to waste their time on people who aren’t willing to take that sort of plunge. (I tend to be that way myself.) However, these people will often agree to sponsor someone if approached and asked.

Don’t hesitate to talk to someone you think would be good for you. If you do, you may miss out on one of the most meaningful relationships of your life.