This will be a long one, but you may find it worth the effort. And yes, it has a lot to do with recovery. 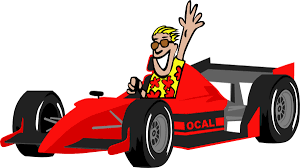 We all think we know how to drive, and to a certain extent that’s true. We have learned the mechanics of driving. We can get our vehicle from place to place, usually with no problems. The really important skills, however, may have escaped us. What I’m going to discuss here is a different way of thinking about driving, one that will simultaneously provide the benefits of meditation, while at the same time it will make you a better driver.

“Okay,” you ask, “What does this guy have to teach me? Who does he think he is to give advice to me, the World’s Best Driver?”

Back in my day…

Well, for one thing, I’ve been driving for around 60 years, in all sorts of conditions, and I’m still alive. For another, I’ve made many mistakes, some of which could easily have killed me, and I’ve tried to learn from them the things that I should have known to begin with. Yet another: I’ve taught tactical driving and remedial driving to police officers at both the police academy and professional levels, and I’ve had the training and experience to do it. I also worked as a professional chauffeur for five years, driving CEOs of Fortune 100 companies, billionaires, wannabees, and at least one former head of state.

Driving is about 10% physical.

A car will only do three things: go, stop and turn. We don’t need much physical effort to cause a modern car to do the things we want it to do: effort to steer – negligible, with power steering; checking instruments and mirrors – negligible; braking – negligible; accelerating – negligible (sometimes unfortunately so). Actually, the thing that takes the most energy is remaining upright and in a position that allows us to do all of those things well and quickly when needed.

The other 90% of driving is mental — or at least it should be.

We do a tremendous amount of information processing if we’re driving mindfully. We solve, almost instantly and unconsciously, complex physics problems involving speed, relative motion, vectors, acceleration – actual and relative, deceleration – ditto, and other factors that would require long equations and a lot of pencil and paper time to work out bit-by-bit. But here’s the catch: we can only do that if we have accurate information to process; the more information we have, the better. Reduce the incoming data enough, and the rest of our skills are essentially useless regardless of how good we are — or think we are.

Stirling Moss racing an Aston Martin DBR4 at the 12 Hours of Sebring, 1958

Do I ever resemble this guy?

So, putting it another way, good driving is mindful driving. It is learning to drive with distracting factors minimized, and preferably eliminated entirely. That includes things like texting or talking on the phone — with or without hands-free; much testing has shown that there’s no real difference in the distraction factor, regardless of what we might think. Involved conversations with passengers, eating and drinking, alcohol and other drugs (including nicotine), and so forth are also distracting.  As a former smoker who once dropped a lit cigarette in his lap at 75 m.p.h. on a bumper-to-bumper freeway, I can attest to smoking’s potential distraction quotient.

We all understand that it’s impossible to eliminate all distractions when we’re driving. Human beings are hardwired to be distracted — to keep track of the things around them that might be important. Our problem is differentiating among the things that we perceive as threatening. If we let our concerns about an argument at work occupy our mind when we’re driving home, we are placing something that we can’t immediately control ahead of all the deadly weapons in the hands of ourselves and the other drivers around us. If our other concerns distract us enough (reduce our ability to gather and absorb information) and someone else makes a mistake, that may be all it takes to give us something far more immediate to worry about, if we are still able to worry. 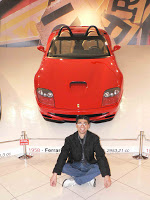 When I tell people I meditate while I’m driving I get a lot of raised eyebrows, as if I’m not paying attention and endangering myself and others. That couldn’t be farther from the truth. Zen Driving is simply concentrating exclusively on our driving as much as possible. If we do it properly, it has the same benefits as other meditation: it concentrates our minds on one thing, to the exclusion of the mental whirlwind in which we normally operate. That allows changes to take place in our subconscious processes that we may not notice, but which have measurable effects on our quality of life.

We all taught ourselves to drive. Someone else guided us until they thought we had the basic skills down, then we got our licenses, and after a few weeks or months we convinced ourselves that we had this driving thing knocked. And we did–that is, we had mastered the physical part, which doesn’t require much in the way of skill or smarts anyway. But the trick of being a good driver is in the details.

Rarely having to use the brakes involves careful attention to following distance and the potential actions of other drivers. It often means changing lanes to one with less “action,” remaining at the same speed as other drivers, insuring that we have sufficient room to change lanes safely, signaling for all 1 lane changes, merging properly by matching the speed of the cars in the other lane before the lane change, and so forth.

We all know the laws and rules of driving, and we all know how to physically handle the car, at least to the extent necessary for most driving. 2  What we need to shoot for is self-control behind the wheel. No one achieves that perfectly, including me. Zen Driving (which, by the way, I didn’t invent) helps us come closer to that. Furthermore, it allows us to drive with enjoyment, engagement, and the knowledge that we are in control of our vehicle, instead of just pointing it and hoping for the best like most of the other folks on the road.

It’s easy. We make a game of it. We try to concentrate intensely for short periods — without allowing any distractions if possible — and try to drive perfectly. That involves, essentially, avoiding the use of our brakes by paying attention to following distances, closing speeds, overtaking, merging distances and speed, and avoiding undesirable notice by communicating our intentions (turn signals in plenty of time, before the car changes direction), allowing for others’ mistakes, and following good driving practices. 3

That’s all there is to it. All the foregoing b.s. was just me telling you why I think it’s important. However, this stuff — like recovery — is simple but it’s not easy. In a sense, it is recovery: recovery from driving like a zombie, often a maniacal zombie, and a state of unmindfulness.  And you know what? It carries over. Mindful driving will help us with mindful living, and with our other meditation and concentration practice.

Start slowly, for short periods. Make a game of it. If you mess up don’t punish yourself, just determine to do better the next time — to become more skillful in this, as in the other things in life. It’s a learning process. Learning always involves mistakes, but as you become more skillful you’ll make fewer of them. One day you’ll pull up into the driveway, mindfully watching for kids, toys, pets, other obstacles, the mailbox and the garage door, and realize that you won that trip! No mistakes of which you’re aware and no hassles. Eventually you’ll do it automatically. When you reach that level, you, your passengers and the other folks on the road will be safer for your efforts. 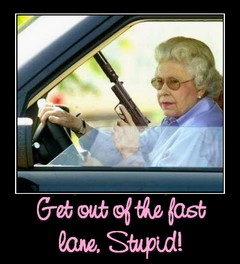 We need to remember that when we drive aggressively it pisses off other drivers, and a pissed-off driver is an unsafe driver. As a result, our actions can have consequences down the road that we never know about. Anyone can drive like a jackass. We see them every day. We don’t have to emulate them.

1 Because if we don’t signal for every lane change, we may forget when we’re in a hurry or distracted. (Practice makes perfect, remember?) Our flashers are for communication, and our relationship with the community of drivers rests on communication. They need to understand what we’re doing and allow us to do it. The blinker should flash at least five times before your car begins to change direction; if you don’t have time for that, you don’t have time to change lanes safely. And one further note: Just because you signal doesn’t give you the right to do anything. Use common sense.

2 That’s not to discourage you from taking all the advanced driving classes you can get. Any knowledge will improve your driving, even if all it does is teach you your own limits. Just don’t get the idea that a 2-day course in your new BMW somehow is equivalent to the many thousands of hours that it takes to become a competent race driver. Race drivers are some of the best-trained and athletic humans on the planet. They can take 3 or 4 G’s of lateral force pulling their head all their internal organs sideways, while remaining alert and processing information incredibly fast at speeds two and three times that of a highway driver. For several hours. In a car with internal temperatures exceeding 120º F. Wearing fireproof coveralls.

Don’t get cocky. You’re not that good. Neither am I.

3 If you’re not sure what “good driving practices” are, get a driver’s handbook and read it carefully. Every state has them, and most are available online. There are also excellent books on the subject that include finer points like estimating curves, stopping distances based on the color of the roadway surface, and other useful tips. Isn’t your life and those of your loved ones and the other folks on the road worth a few hours of reading and thought?